Daring quality the dominant focus of the APCHQ’s work

At the APCHQ convention on October 18th, Richard Darveau promoted “Well Made Here” in front of contractors.  The purchase of goods with responsible critieria, such as solidarity with locally manufactured materials and which surpass the minimum standards established by building codes mean that more and more APCHQ certified contractors will promote the program. 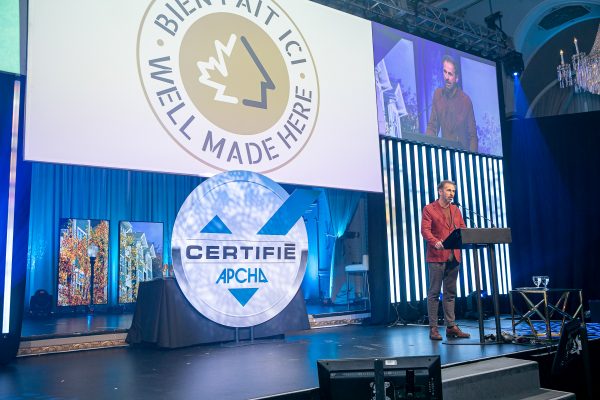 The contractor seems to be a species in forced mutation. Almost all the workshops and conferences that took place at Château Frontenac on October 18th and 19th during the annual meeting of the Association des professionnels en construction d’habitation du Québec (APCHQ) converged on one truth: the contractor’s clients and employees expect much more.

On the main menu of current concerns for new construction and renovation contractors, the following three points emerged:

Invited to present the last of the Distinction Awards to certified members of the APCHQ, Richard Darveau explained the benefits of the “Well Made Here” program.

Mr. Darveau’s presentation revolved around social responsibility as a competitive asset for contractors.

He maintained that building and renovation contractors have an interest in seeking consumers who are sensitive to social and environmental issues, which implies favoring locally-made products that are built to last as part of their service offerings.

Several AQMAT members, some of which are also participants of the “Well Made Here” program, exhibited their products and services at the 58th APCHQ annual meeting including Dupont, Soleno, Cold Dragon and Cantech.

Social responsibility as a competitive argument

In an article published by EDC, Alison Taylor, Senior Director General, Business for “Business for Social Responsibility”, reports that “According to the Reputation Institute 42% of how a person feels about a company is based on that company’s CSR track record. There are ample case studies proving that socially responsible brands have more loyal customers.”

She also argues that a recent Deloitte survey found that 63% of millennials place more importance on “social benefits” than “profits” as the primary objective of a business. There is no longer anything to prove: a proactive CSR strategy is profitable in the long term.

“Such reports reinforce statements we’ve put forward with regard to the notion of social responsibility as a competitive asset for contractors, sensitive to these issues, who favour locally-made sustainable products as part of their service offering,” says Célie Cournoyer, director of operations for “Well Made Here”.

Richard Darveau in conversation with Luc Bédard, chief executive of Association Béton Quebec, setting out, among other things, the QUALIBÉTON standard, a certification which ensures that concrete conforms to Canadian laws and standards.