Banners and buying groups support the program in their own way and according to their means. As the national holiday approaches, we are sharing with you some of the activities that contribute significantly to the growth of our pan-Canadian program. 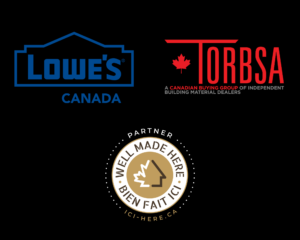 A foot in the door in Ottawa

On May 17, parliamentarians, authors, diplomats, journalists, business leaders and cultural leaders gathered at the Fairmont Château Laurier hotel in Ottawa for a gala evening entitled Politics and the Pen, animated by two federal cabinet ministers, Marci Ien and Seamus O’Regan. She is Minister for Women, Gender Equality and Youth. He is Minister of Labour.

As a sponsor of the event, Lowe’s Canada invited Richard Darveau, President and CEO of “Well Made Here” to their table.

The opportunity allowed him to strengthen the contacts made with several politicians and senior civil servants, including François-Philippe Champagne, Minister of Innovation, Science and Industry. 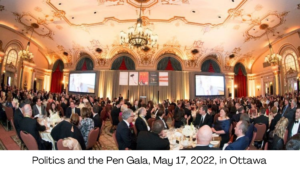 In the aim that “Well Made Here” reaches retail stores, program management is deploying its energies to get invited to retail affiliate meetings hosted by banners and buying groups. This would present us with the opportunity to outline the advantages of positioning themselves as destinations of choice for accredited products.

TORBSA has us scheduled for June 22 around midday, at which time Richard Darveau will be able to address affiliates from this buying group that became a major partner in 2021.

This kind of session, whether virtual or in-person will also be organized with two other buying groups, but the dates and format remain to be confirmed at the time of publication of this newsletter.

Similarly, two of the banners should be confirming our participation as exhibitors at their Fall buying shows. 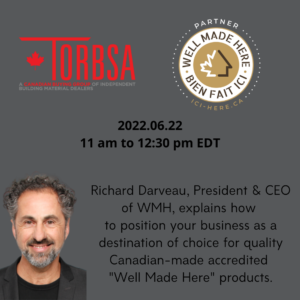