Pandemic, recovery and probability of an election force revisions to our strategies

Volatility and uncertainty are prevalent at the moment. To the point where a long-term strategic plan cannot be perfectly carried out with the necessary agility. The “Well Made Here” team has therefore devised a tactical plan that takes into account the pandemic, its effects and the variable geometry recovery observed across the country, as well as the possibility of a federal election.

It is not only the excitement surrounding the Games of the XXXII Olympiad, that is being felt, a wave of positive energy is leaving in its wake a renewal of enthusiasm and national pride.

On the other hand, a 4th wave of Covid-19 and other disturbances including the probability of the dissolution of parliament warrant calculated

For the “Well Made Here” team, the consultations and work carried out in 2020 and 2021 have resulted in the identification of actions that do not depend on immediately forming a partnership with the Government of Canada. Staff has started making this action plan known to the banners, their networks, and the participating manufacturers.

In a table that shows the integration progress of each of the stakeholder groups, the approaches aimed at increasing brand awareness are summed up for easy reference (click on the image below to view the PDF). The document contains the commitments that were agreed to on joining and the tactics initiated by the “Well Made Here” team to expand the program’s reach. Work that is carried out in phases.

When membership anniversaries come around, renewed support should be loudly broadcasted both internally and in public forums.

“All activity started when the organization was founded in October 2018. The necessary support has been provided to banners and manufacturers since that time. Through model stores, work began with retail networks in 2020. Collectively, the entire supply chain is regaining the momentum that existed before the pandemic and we have targets set for the second half of the year and for next year, ” says Célie Cournoyer , Director of Operations. Specific tactics are planned to begin raising awareness among building contractors.

The next decision-makers will be chosen from among the candidates who will run, leaders in their respective communities.

When a federal election is called, targeted measures will seek to introduce the program and its mission to candidates. These persons, whether elected or not, can help in conveying the importance of local buying, the support needed for manufacturers operating facilities across the country, and the need to find solutions to disruptions that exisit in retail networks.

Since ministers and members of the cabinet will be chosen from among elected officials, when the partnership application is submitted, the decision-makers to whom the request is made will already have general knowledge of the program. This boosts the chances of a favorable outcome regardless of which party holds power in Ottawa. 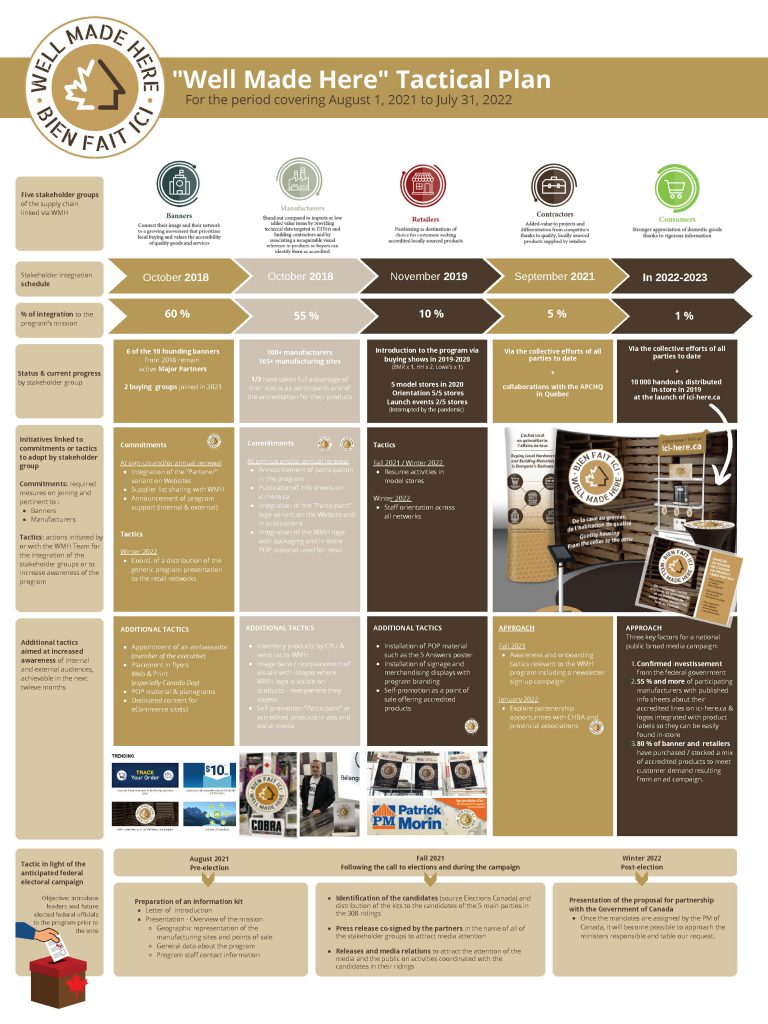 Like the floribund pickings and savoury late summer harvests being carried out from coast-to-coast, all of the measures outlined in the plan will bear fruit. We are convinced of it.