Initially, we wanted to start with two points of sale. Because of a more pronounced interest, which is very encouraging, there will be five participants in the pilot which will be used to verify a theory: if a business makes efforts to position itself as a destination for quality products manufactured in Canada, will it benefit? And by extension, will this help its banner and its suppliers? Taking the notion even further, will this be perceived positively by its customers, consumers and professionals alike? 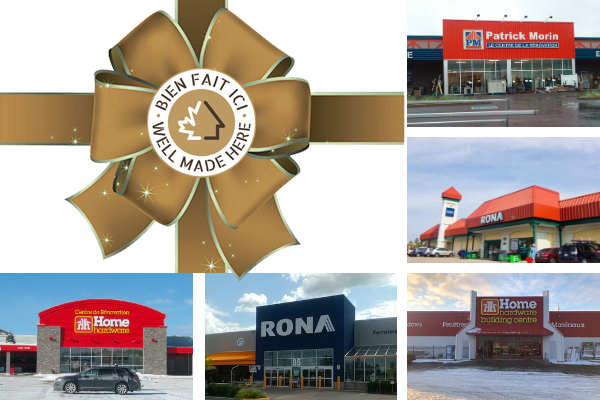 Thanks to the synergy generated by the five stakeholders of “Well Made Here”, we will want to demonstrate that everyone gains by supporting the program: the retailer and its banner, its suppliers, its customers and contractors.

It will indeed be a question of synchronizing the operations of all the parties and coordinating a marketing offensive focused towards a certain change.

Leading up to the pilot experience

It was in October that the “Well Made Here” team began a series of meetings in order to paint a complete picture of the group’s supplies.

Together, the new partners will draw up a list of Quebec and Canadian products that are valued by consumers or professionals who regularly shop at each of the identified renovation centres in order to steer performance over the coming weeks. The objective is to enrich the in-store offering with more and more “Well Made Here” accredited products.

“The goal is to be ready by the end of the year or by the beginning of 2020 at the latest,” said Ms. Champagne, director of communications and marketing for the “Well Made Here” program.

The first five renovation centres who volunteered to participate in the pilot and who will be made over with program branding are:

Located north of Highway 440, between 19 and 25, the Laval branch of Patrick Morin was founded in 1960 by Patrick Morin and his wife Denise Benny, with the acquisition of two sawmills and a small hardware store in the municipality of Sainte-Marcelline-de-Kildare in Lanaudière. Over the years, the small lumber yard of Sainte-Marcelline became a true renovation centre. Between 1975 and 1983, the business grew. Seven of the couple’s nine children joined their patriarch Morin and several new points of sale opened their doors.

“Since customer experience is a strategic priority at Patrick Morin, we are pleased to work in partnership with” Well Made Here” to establish a model store in Laval,” said Michel St-Jean, general manager of the company which has 21 points of sale.

The second center to volunteer to become a lab is the company founded as a sawmill in Saint-Jovite in 1906 by Alcide Forget, which over the years and generations has stood out and branched out into the retail trade. It now has fifth generation shareholders. Claude Forget Inc. doubled the size of its store in 1998 and joined the RONA banner in 2003.

“As a proudly 100% local company, RONA Forget has not hesitated to promote the “Well Made Here” program. It is in line with our values ​​for recognizing the efforts made by the locals who design, manufacture and distribute quality products,” expalins Benoit Forget, Vice-President Sales and Operations.

In 1962, Eli Bertrand and his two sons established what would be known in the region as the Hawkesbury Lumber Supply Co. where they operated a 1,000 square foot store to showcase merchandise. Three times in its history the company moved before finally settling in its current location. Having experienced two transfers from father to son since then, it is now managed by Jean-François Bertrand who has been at the helm since 2000. The store has been part of the Home Hardware network since 1989.

“Buying Canadian products doesn’t just help the contractor, it’s a gesture that helps all Canadians.” For this reason, Jean-François Bertrand, President of the Hawkesbury Lumber renovation center, which operates under the Home Hardware banner, decided to become one of the renovation centres participating in the “Well Made Here” pilot.

It was in 2007 that Hugues Nepveu and Isabelle Patry founded the Centre de Rénovation Ste-Marthe-sur-le-Lac. Originally equipped with ​​14,000 sf of retail space, the store and the interior lumber yard doubled in size in 2012. A Home Hardware affiliate for 5 years now, the business expanded again in 2017 with the addition of the L’Épiphanie and Fabreville stores.

“Working with Canadian suppliers is the application of the core values ​​of solidarity and unity on which Home Hardware was founded. Suppliers are an important part of the retailer equation, customers and suppliers, it goes without saying that we favour what’s local,” states Hugues Nepveu, General Manager.

Ferronnerie Houle was founded in 1947 by Gabriel Houle. After several years of association with the latter’s son, Robert Houle, Raynald Archambault became the sole owner of the company in 2004. His daughter, Audrey Archambault, joined the company as co-owner at the end of her studies at HEC Montréal in 2011. It was following her university project in 2012 that the store was relocated to Conrad-Gosselin ave., in order to triple the surface area. The renovation centre, now better known as RONA Iberville, now has a large indoor and outdoor lumber yard, as well as a complete tool rental centre.

“Being a family and local business for over 70 years, it is obvious to us that we want to participate in the” Well Made Here” program.  It is essential for us to encourage local entrepreneurs and businesses. We always favour products created and produced locally, ” says Audrey Archambault, co-owner.

In addition to the commitments from the renovation centres participating in the pilot and those of the organization, site visits, orientation sessions with the staff and all the necessary support will be offered in order to measure various criteria already listed in the previous newsletter articles about the initiative.

It is therefore with great anticipation that we will all await publication of the performance results of this operation, which will be shared with the entire business community in the spring of 2020.